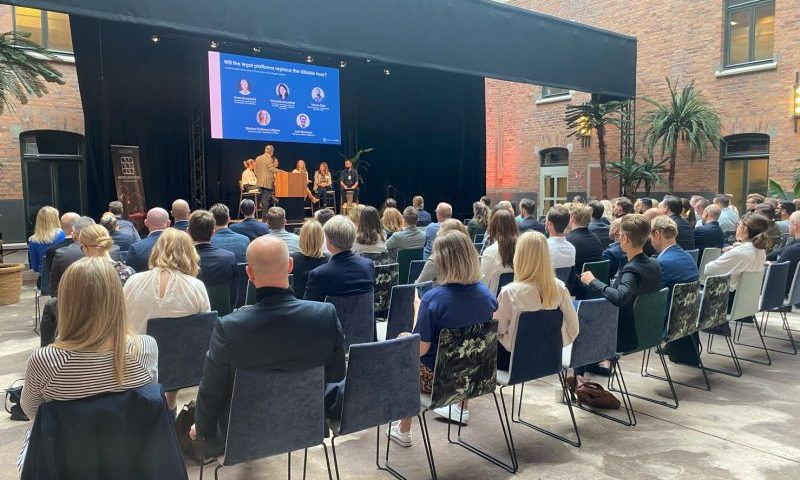 Yesterday we attended Nordic Legal Tech Day hosted by LegalWorks and what an amazing feeling to be able to meet up with colleagues and fellow techies again in person! It was such an inspiring day! 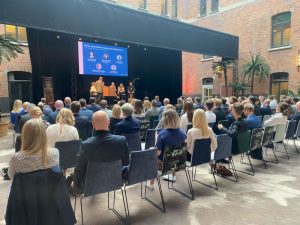 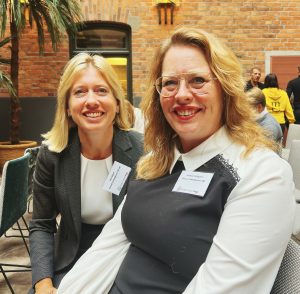 It all started off with a welcome introduction by the founder of LegalWorks, Ulf Lindén, and Caroline Snellman, CEO LegalWorks Advisory, saying that the last year or so has been less about champagne bubbles and more about efficiency and that maybe the pandemic has been the tipping point for digitalization in the legal sector? At least that was a question that, hopefully, the speakers of the day would help us get an answer to. 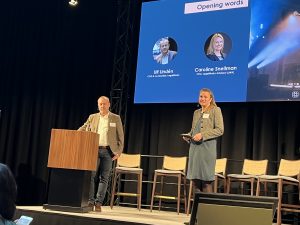 In the first keynote of the day, Anna Ljungdahl, Investment Director & Head of Sustainability at Industrifonden gave her views on why investing in legal tech is a great idea. 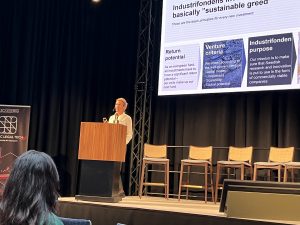 Firstly, it’s a market with enormous potential. Legal tech is one of the slowest sectors to go digital, but nevertheless almost 3 BEUR has been invested globally in legal tech during 2021, setting a new record for the year already. Of these global transactions, around 300 MEUR was invested in Europe, with Swedish Lexly as the fourth largest investment with 175 MSEK. The main investments are made by venture capital though and it’s still a hesitant exit landscape without enough industrial buyers.

Secondly, it’s a chance to make a transformative investment with the potential to introduce a new paradigm and define the legal industry of tomorrow. That was the idea behind the early investment in Lexly (Avtal24 at that time) 15 years ago. As Anna Ljungdahl pointed out though, you need to be a patient investor to go into the legal tech market, since most transformative investments takes about 10-20 years to pull through. 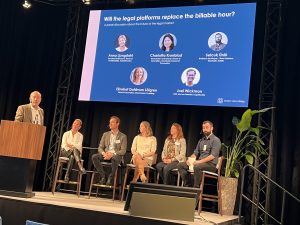 In the following panel discussion Anna Ljungdahl was joined by Selcuk Ünlü, Business developer, Norstedts Juridik, Elisabet Dahlman Löfgren, Head of Innovation, Mannheimer Swartling, Charlotta Kronblad, Researcher and lawyer, House if Innovation, Stockholm School of Economics, and Joel Wickman, CEO and co-founder, Legalbuddy. The larger question at hand was if the legal platforms will end the billable hour, but also about general predictions and how legal tech as such will impact the legal industry going forward.

Selcuk Ünlü started off by explaining how Norstedts has a “digital-first” mindset and how the company has transformed into having more than 90 % of their business in the digital sector.

Elisabet Dahlman Löfgren described the interesting way in which Mannheimer Swartling tackles the digitalization issue with inter alia the Innovation Lab as a way to be at the forefront of the current developments. Instead of seeing startups creating new solutions that make overtake the business, they aim to be a part of the innovation drive themselves. As Elisabet Dahlman Löfgren wisely pointed out, tech is going to be the major thing impacting the business onwards and this is something that everyone in the industry is aware of. In fact, all talk about lawyers being risk aversive and opposed to change are quite exaggerated, and there are other obstacles such as GDPR and clients still mainly asking for billable hours deals that prevents the development more than the lawyers’ attitudes.

When it comes to clients still asking for billable hour deals though, Joel Wickman made a good analogy to mobile phones. Before the iPhone was released, he was happy with his Nokia and had no thoughts about using his phone for other than calling of texting, but when he first got an iPhone in his hand, he immediately knew he wanted it and all its new functionalities. It’s the same with legal business models; the providers of the service must come up with a model that is appealing to the customers and gives them something they didn’t even know they wanted.

Charlotta Kronblad mentioned the three main conclusions from her dissertation “A Bubble In Trouble” that (i) digitalization has affected the clients’ businesses and the contexts that legal professionals serve, which is why legal services will increasingly concern digital matters regardless of the legal sectors’ own digitalization (for example giving advice on e-commerce issues), (ii) digitalization is not the end result but provides the means of change, and can go in any direction such as help turn products into services (servitization) but can also turn services into products and places into services (with virtual courts showing the way) and (iii) for digitalization efforts in law firms it is vital to amend the pricing model accordingly. Taking a look in the crystal ball, she predicted that ten years from now, there will be a focus on legal design thinking, illustrations and new ways of looking at law as a service. 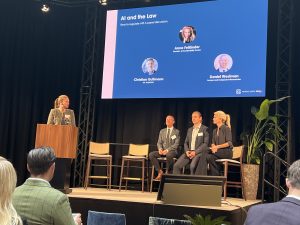 After different breakout sessions, there was another very interesting and intense panel discussion with Daniel Westman, Lawyer and Independent Researcher, Christian Guttmann, VP, TietoEVRY and Anna Felländer, Founder, AI Sustainability Center talked about AI and the need to regulate it. The panel was moderated by Caroline Snellman, CEO LegalWorks Advisory, in an excellent way.

Anna Felländer started off by talking about the need to include a human rights aspect in the new EU regulation and how AI need to be implemented with an ethical filter.

Both Daniel Westman and Christian Guttmann agreed about the need for ethical guidelines and principles when developing AI tools, but didn’t think that a new EU regulation adding an extra layer of regulations specifically for AI was the right solution. As Daniel Westman pointed out, there are already existing regulations that apply for different aspects of the development, such as product responsibility, GDPR, IPR, consumer rights etc. Instead of adding an extra, very unclear and general layer to those, it would be better to add AI aspects to the specific areas. As an example, Daniel Westman mentioned self-driving cars. There are already regulations about cars and it would make more sense to add the specifics about AI uses for cars there. It all reminded him of the 1990s when Internet was described as a “lawless land”, when in fact all current laws were applicable to specific issues and transactions regardless of whether they were conducted on the Internet or not. The regulations already in place turned out to be sufficient also for the Internet.

Likewise, Christian Guttman feared that a new unclear EU regulation would drive innovation out of Europe and that there is a severe risk that focus will be on keeping the business regulatory compliant rather than putting the efforts on further developments to find solutions to solve the problems. He also pointed out that it seems a bit unfair to single out AI as the only technology to be regulated this way. Businesses will protect their brands, and will not keep bad algorithms that may appear due to the current agile development. Startups and developers need to be allowed to learn from practical experience with the help and support of ethical guidelines.

Anna Felländer maintained her view that AI is a different creature since it will self-learn, and that it therefore needs to have extra regulations.

Daniel Westman concluded that even so, the problem is the vagueness of the suggested regulation which will be very problematic to understand and implement in practice. As he pointed out, this regulation is at risk to be the equivalent to trying to regulate all risks with computers in the 1960s or with the Internet in the 1990s, before anyone really understood what the risks were or the need to regulate them. More of these insights can be found in the report Daniel Westman has written for Svenskt Näringsliv about the AI development and who is responsible for it (“Vem tar ansvar för AI? Gällande lagstiftning, framlagda reformförslag och övergripande analys”) 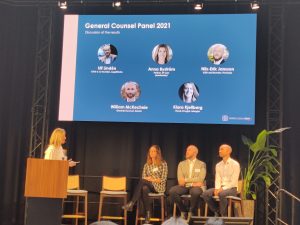 In the afternoon, there were more interesting breakout session and a presentation of The Nordic General Counsel report by Ulf Lindén, LegalWorks. This report is based on a survey taken by a few hundred General Counsels, most of them based in Scandinavia, and created by ALTNordic, a collaboration between alternative legal service providers in four countries (Experticon ApS in Denmark, Laissa Oy in Finland, IBF Legal AS in Norway and LegalWorks in Sweden). One question in the survey was regarding the use of different tech tools and it resulted in the following top list for 2021:

There was also a clear trend towards a greater use of compliance tools since “More regulation is one of the key headaches for GCs.” Taking into consideration the covid-19 situation the report summoned the continued effect on legal team would be:

The results were then discussed by Klara Kjellberg, Head of Legal Intergiro, Nils-Erik Jansson, CEO and founder, Precisely, William McKechnie, General Counsel Alecta, in a panel moderated by Anna Byström, Partner EY Law. The conclusions here was that since we do not have that big legal in-house departments in Scandinavia, they are already quite efficient and therefore difficult to scale. They also mentioned the difficulties in getting IT solutions implemented adapted for their department, probably becauce they often were considered as a separate department that did not gain the business focus. The strategy for the future was to further integrate legal into the business and be more involved in business development projects.

And in the end, we all also got the bubbles we had been thinking of since the start of the day. The best of two worlds! Thank you LegalWorks for a fantastic day!