LegalGeek has launched a new online webinar series, The Uncertain Decade, where Richard Susskind and Mark Cohen discuss the unprecedented challenges the legal industry is facing at the moment and give advice on how to adapt to the new landscape.

The speakers are two of the most well-known names in the industry; Mark Cohen being a global thought leader, columnist in Forbes and CEO of Legal Mosaic, and Professor Richard Susskind OBE being an independent adviser to international professional firms and national governments and one of the world’s most cited author who has written ten books on the future of legal services.

The first of four seminars was held last week, on 30 April, and focused on two main aspects, (i) legal life after COVID-19 – a very new normal, and (ii) when courts close, what will half the world’s lawyers do? 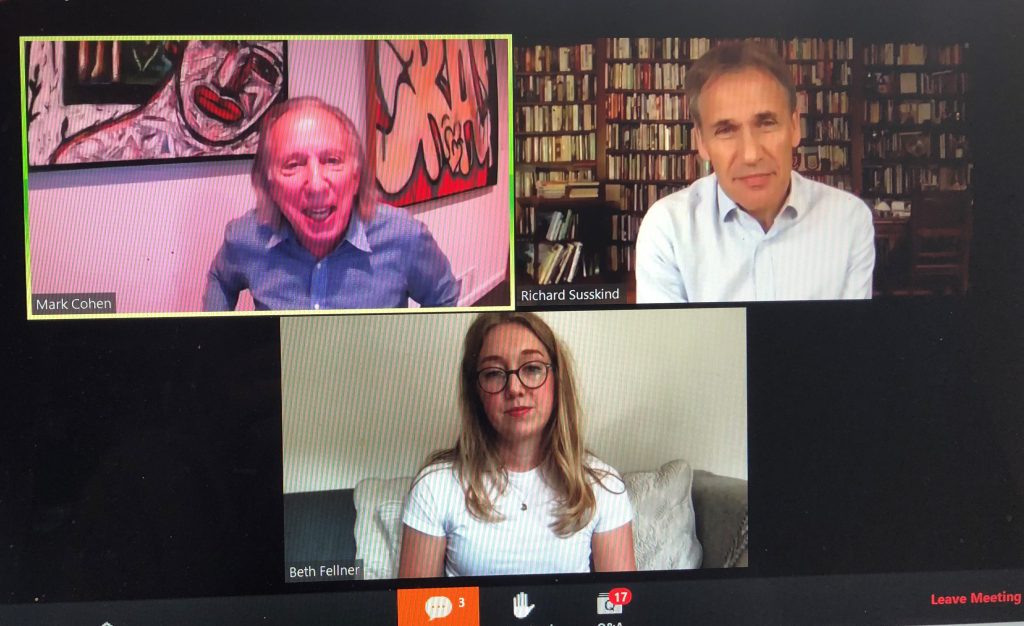 Mark Cohen started off by talking about how the legal market has survived past crises, but how it’s different this time. Legal professionals have a tendency to look for precedents and past crises, but that will not give enough guidance to predict what the new normal be like after COVID-19. This time it’s not simply an economic crisis, it’s something that already has had a much larger impact with remote workforces, online/distance learning for law students and crippled courts around the world. One of the first things that occurred after the start of the pandemic in the legal industry was that workforces went remote and everyone relied on technology. The crisis has cast a bright light on technology as a means of collaboration and how it has been underutilized in the past in the legal industry. This drive for digitalization and utilization of technology is here to stay and will not decrease as the lockdown eases. The legal industry will be more about platforms, competences and metrics and less about pedigrees.

Richard Susskind then provided his reflections on the topic and emphasized how we should not only be looking at what the future of lawyers is, but how  we will be solving the problems that lawyers are currently the best answer to in the future. So far, we have not really seen any different business models, more of ’innovation by press release’ and the overuse of the word innovation to internal changes designed to enhance profitability, not to improvements that positively impact legal buyers. Even in this crisis, we are seeing new and different ways of communicating and the use of technology for automation, but so far not any real transformation. There is for example very little discussion of the use of AI at the moment. The important question is how to get law firm leadership to change. As Richard Susskind pointed out, it’s hard to tell a room of millionaires that their business model is wrong… He made a distinction between leadership and managers, where the latter is focused on the short term survival, whereas the former is focused on how legal life will be fundamentally different after the crisis. A business model change would be a shift from service to products based on technology.

Mark Cohen was in violent agreement with Richard Susskind on this and added that current law firm models will not be optional going forward, even though they have worked for a long time. The problem for law firm MPs is how to tell the other partners that the profitable model is no longer sustainable. There is a need for a cultural change, to add a new set of metrics to decision than just profit and new business, and to look at how the legal profession structure of serving one-to-one could be changed into one-to-many.

Both Mark Cohen and Richard Susskind concluded that it is easier for new players on the market, who start without any old structures and business models, and therefore can build from scratch and get buy-in to a new vision already from the start. One thing that new players and alternative service providers do not have though, is the long and deep relationship with their clients. This relationship and trust is something that law firms should use to gain a competitive advantage. As Richard Susskind pointed out, the firms who understand the shifting priorities of clients will be the firms that succeed during this time.

The second part of the webinar focused on courts and the access to justice challenge. Richard Susskind provided a status report on how most courts around the world are now physically closed and how this will drive change. Courts have been very conservative and up until now most judges have been skeptical of using remote methods in proceedings. But to ensure ongoing access to justice during the current circumstances, governments and judiciaries are rapidly introducing various forms of ‘remote court’ – audio hearings (largely by telephone), video hearings (for example, by Skype and Zoom), and paper hearings (decisions delivered on the basis of paper submissions). New methods and techniques are being developed at remarkable speed. To help the global community of justice workers to share their experiences of ‘remote’ alternatives to traditional court hearings, Richard Susskind is part of the initiative Remote Courts Worldwide.

Many have been surprised at how well the alternatives work, and the change is likely to remain after the crisis. We will see the rise of alternative dispute resolution on a larger scale. There are already such systems and these will increasingly become a viable private digital approach to the public courts. In a few years, the default assumption likely will be remote and a request for in-person will need to be justified. As Richard Susskind pointed out, people have seen in practice for the first time that legal work might be undertaken differently. But this requires new skills for legal litigators. It will be about communicating electronically. Advocacy by video will be a whole new art. And the emergence of Artificial Intelligence will take on important decisions.

Mark Cohen added two important aspects, (i) that legal is almost at the bottom of industries with unhappy workers, only coal miners have more despair, addiction and mental health issues, and (ii) that as many as 85% of Americans are effectively denied access to justice. We should all see this crisis as a real opportunity for the profession to say “we can do better”.

As a wrap-up, Mark Cohen shared the experience from when he was in need of medical care and the doctor focused on outcomes, based on data, with a range of options. Why should it be any different for law and clients? Why should clients not be presented with different options and data to help them decide? Maybe they do not necessarily want to “win” a case, maybe they want to solve the problem in other ways? Sometimes apologies are better than lawsuits… The focus should be on the outcome; on the result for the client. In the end of the day, it’s about delivering a solution to the client’s problem, not about the lawyer performing a specific legal activity.

Richard Susskind agreed on the need to focus on outcome. As he said, we need lawyers to think less about the type of law and more about problems clients face. The purpose of law is not to keep lawyers working, it’s about solving legal problems. Patients don’t want surgeons, they want health. We should not ask what the future of surgeons is, we should ask how we solve the problems they address. The crisis is opening our eyes to doing things differently and forces us to think about outcomes more than how we get there. That’s the central take away of the lockdown.

See also this excellent live blog post from the event by Ron Friedmann: Richard Susskind and Mark Cohen debate the future of the legal industry