This week LegalWeek is in town, and in addition to the actual conference itself, there are meetups and seminars all over New York. Yesterday, we attended a really interesting Tech Talk arranged by Artificial Lawyer and Cardozo Law School on Deconstructing Smart Legal Contracts. Two expert panels gave their views on the emerging technology of smart contracts, its applications and how it may affect the way lawyers and the financial world works.

The first panel with Stevie Ghiassi, CEO of Legaler, Houman Shadab, cofounder Clause.io, Ben Sherwin, general counsel, Uphold, Aaron Wright, co-founder of OpenLaw and associate professor and director of the Cardozo Blockchain Project, and Richard Tromans, Artificial Lawyer, focused on the more technological aspects. They started off though to give smart contracts a context without all the jargon and described what it really is about, i.e. a program (a computer protocol) to digitally transfer assets and enforce the negotiation or performance of a contract by self-executive code. Thus, smart contracts allow the performance of credible transactions without third parties and aim to provide security that is superior to traditional contract law and to reduce other transaction costs associated with contracting.

The creation of smart contracts can involve a wide range of natural language and code, and, as could be expected, raised the question from the audience as to whether lawyers need to learn how to code or not. The panelists had somewhat different opinions on this topic, but the final consensus could be summarized as “if a lawyer has an interest in it why not, it’s always good to understand the logic behind coding, but from a value-perspective it’s probably more worth spending time on traditional work and collaborate with coding experts instead”. As Houman Shadab pointed out, there are more and more software being developed that could be applied to text and that enables users to identify the key elements in a contract and turn them into data objects and computer readable formats without any coding skills being required. For students with an interest in programming though, it could definitely be worth spending time on learning to code, to differentiate themselves from other job applicants or even to create a new career opportunity.

As for the technology behind smart contracts, it was agreed in the panel that even though smart contracts do not require blockchain per se, it will definitely be the dominant technology for it. They did not want to make any predictions weather it would be public blockchain or private blockchain though, but all agreed that at some point one of the versions would prevail. All panelists saw an enormous potential in blockchain and smart contracts, and the way they will provide access to justice and transform the role of lawyers and legal services, even saying that “blockchain will take over the world and all assets will be digitalized” and that with smart contracts “we are building a new intranet”. There are of course many challenges left to solve, like jurisdiction, security risks, responsibility issues if something goes wrong or if a party opposes the outcome etc, but the panel was confident that these challenges would be handled, pointing out that “blockchain has been around for ten years but has so far never been hacked”. 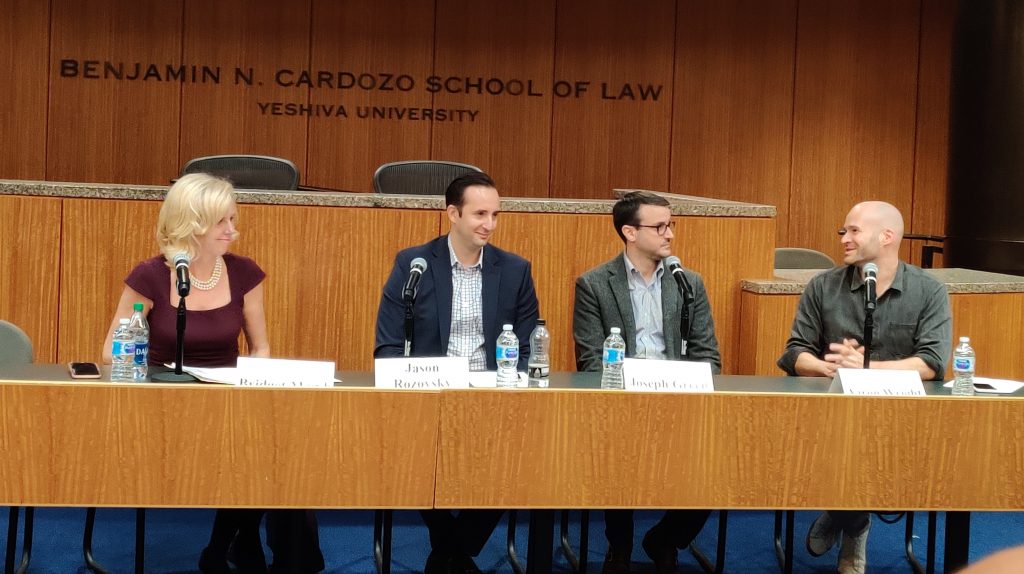 The second panel with Bridget Marsh, executive vice president and general counsel, The Loan Syndications Trading Association, Jason Rozovsky, head of the Legal Center of Excellence at R3, Joseph Green, counsel and director of client experience at Gunderson Dettmer and Aaron Wright, focused more on the business cases for smart contracts. They pointed out that smart contracts provide a possibility to standardize transactions with a trigger that can be objectively verifiable and gave examples of projects from central banks transactions and insurance policies to promissory notes with interest paying elements. They also emphasized that law firms will not be the leaders of the blockchain development, and unless a client has a use case, lawyers are not going to start pushing for smart contracts. The main challenge with blockchain and smart contracts will be the same as with all technological developments – to change the human behavior…