LegalWeek New York brings together the most innovative technology and legal thought leaders, both at the conference itself and at all other seminars, networking events and meet-ups hosted all over Manhattan this week. 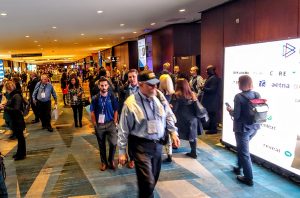 Compared to previous years, there was much less hype around AI, blockchain and technology as such this time. Instead there was a clear shift to a business focus with seminars on design thinking mixed with analysis of the state of the market, navigating data protection restrictions and compliance risks (even a special seminar on legal risks with emojis) and how to optimize billing, maximize profits and predict legal outcomes. The big take-away this year was that the legal profession clearly is moving beyond the hype to more realistically asses how technology should be used in the business. In the discussion around automation and the importance of implementing tech tools to become more efficient in the legal work there was also the issue of having a modern well adapted workplace to attract talent. Thus, the focus on automation has moved from being driven by clients to a business development and survival issue. Practice may make perfect, but repetitive tasks are not considered a fan-favorite among attorneys… 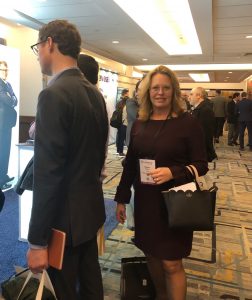 Law firms and legal departments that are left behind won’t just be losing efficiency, but also the staff and talent necessary to make things better.

Another key takeaway was the shifted focus in the exhibition area from e-discovery vendors to contract tools, which also could be regarded as a sign on the move beyond the hype and the greater focus on practical business use for technology.

In the opening session, James Willer, Senior Analyst at ALM Legal Intelligence, and Heather D. Nevitt, Editor-in-Chief Corporate Counsel, gave a very interesting and insightful analysis of the state of the legal industry from both a law firm and a GC perspective. A clear trend in the U.S. is how the role of GCs has changed from ‘business killers’ into ‘legal ops’. The GC’s dream list of law firm needs has therefore changed accordingly and there is a disconnect between law firms and GC’s today, as illustrated by this image about the GC’s dream list: 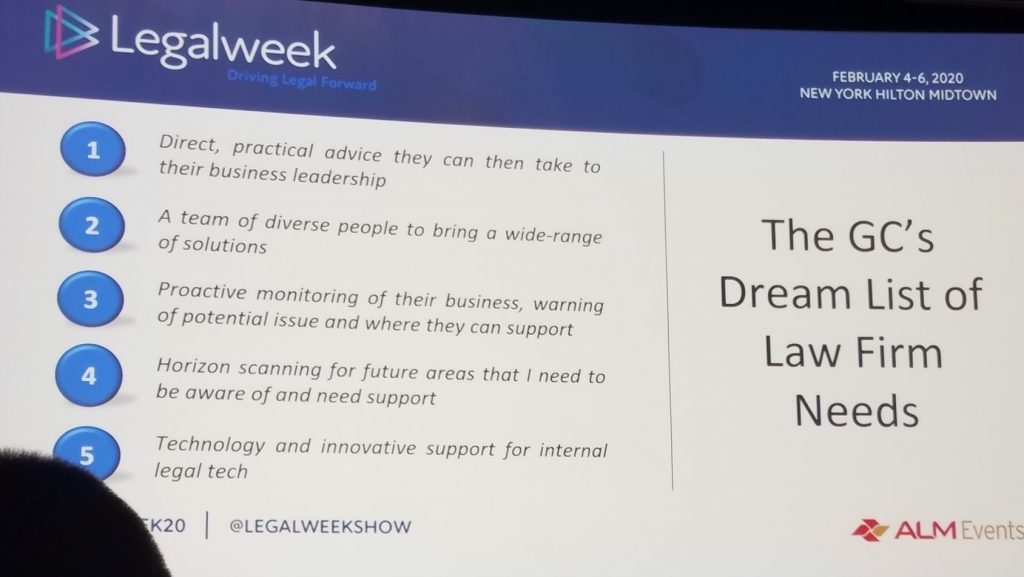 In summary, GC’s want law firms to understand their business priorities and provide legal advice that can better fit with the business objectives. As quoted by some of the interviewed GCs “success happens where legal solutions and business objective are either seamlessly integrated or at least complementary” and “law firms who keep pace with industry trends and competitive set applicable to the client’s business enhances the relationship by developing a shorthand between firm and client”. Many GCs also wish for firms to partner with them as regards to technology or to provide advice also from a technological perspective, but there are almost no law firms that consider tech as part of their service offering today. All in all, there is therefore a huge need for an emerging delivery model to breach the disconnect between law firms and GCs. 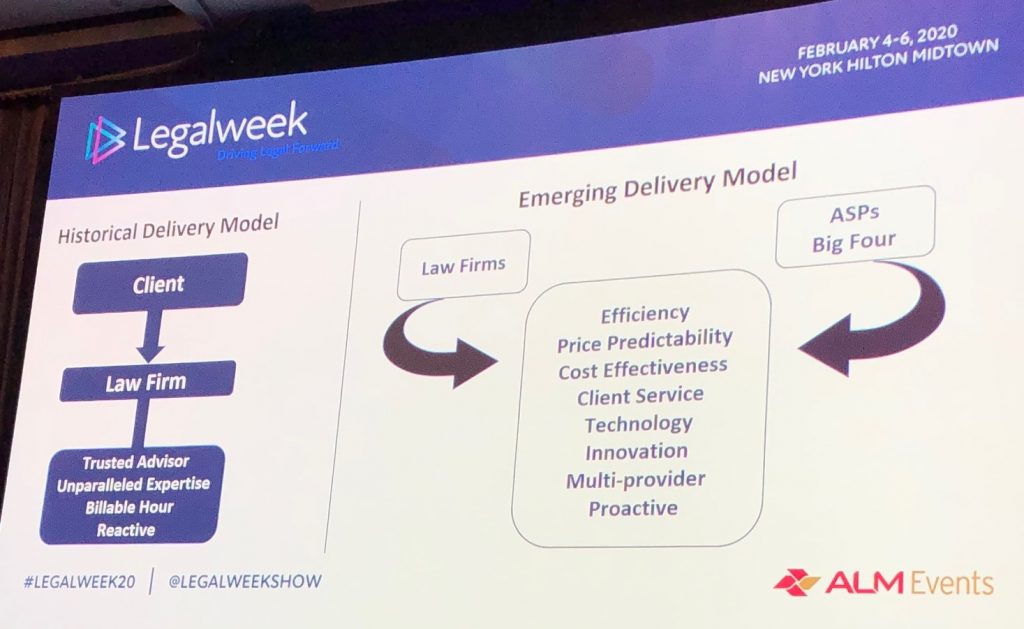 Already though, the big 4s and ASPs have stepped in to fill this void. But this advance of the ASPs and tech providers does not necessarily mean that law firm jobs will decrease. Instead, new forms of collaborations might arise, where ASPs can support law firms and legal departments in handling manual and inefficient tasks, but where law firms still thrive. 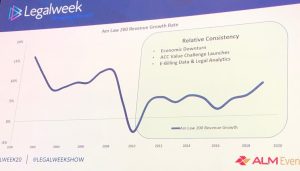 From a law firm perspective, the revenue growth rate has now settled into more relative consistency after the downturn 2008-2010. This coincided with the ACC Value Challenge and the increased use of e-billing data analysis, i.e. with more informed and empowered buyers.

Some clear trends as regards the law firm market reported at LegalWeek were (i) the increase of non-equity partners, (ii) that law firms are able to keep increasing the hourly rates no matter all the talk about client pressure, and (iii) that hourly billing is still the dominant pricing model (92% use this model for more than 70% of the matters) and (iv) that law firms with increased number of diversity and female partners were clearly the ones thriving. Firms that rose in rankings promoted women to partner at three times the rate of the other firms. In this light, GCs along with five large law firms have initiated a diversity lab to promote initiatives to create a more diverse and inclusive legal profession in the new Move the Needle Fund: “Move the Needle Fund – 5 Law Firms, USD 5 Million, 5 Years”

It will be most interesting to follow this praiseworthy initiative and see if the law firms manage to meet the rather aggressive diversity goal they have set by 2025, and to follow the outcome of the current pilots with GCs.

On a side note, it was quite depressing to see the lack of female panelists during LegalWeek itself as there were way too many all-male panels throughout the conference. The second day key note helped the diversity rates up a bit though, with Blockchain and Emerging Technology Researcher Bettina Warburg talking about blockchain in a very knowledgeable and descriptive way. 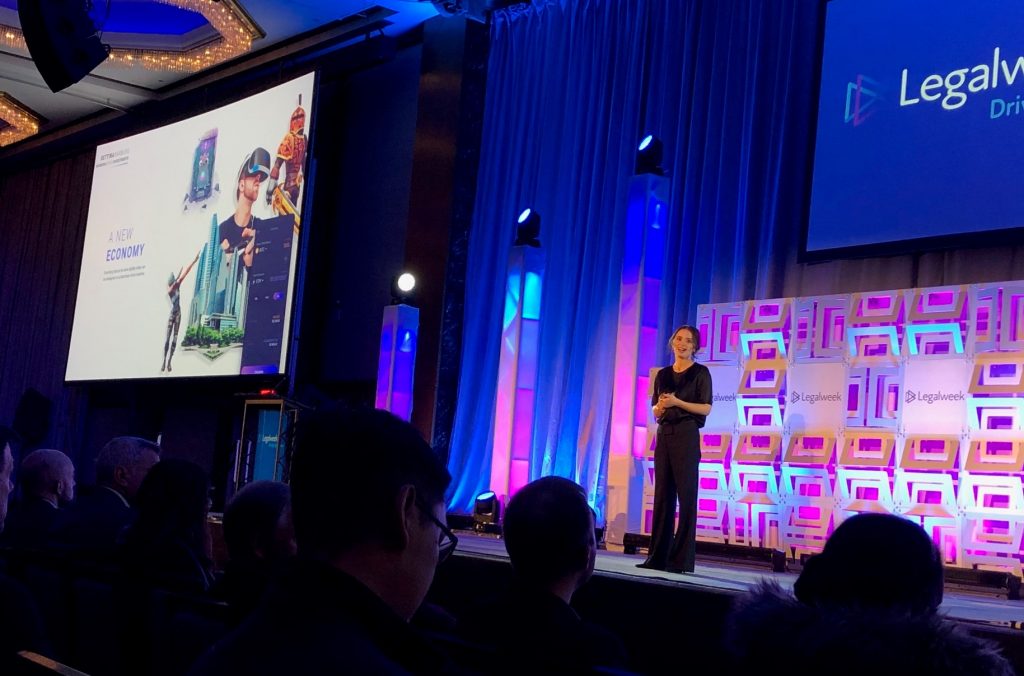 She explained how blockchain environment uses smart contracts to create a stateful and persistent network with no central authority and how the technology could have a future in law, with some conditions. 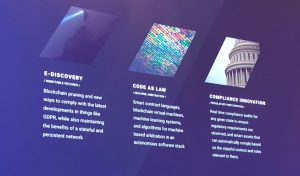 She noted that blockchain could be used in legal areas such as for example machine arbitration and code as law, but that it was important to be wary of the problem with personal data and to remain GDPR compliant by blockchain pruning. There are also some other problems with blockchain and how to make solutions based on the technology advanced enough to deal with all legal complexities. It used to be said that blockchain-powered smart contracts were completely self-executing, but today most professionals agree that there will still be a need for legal intermediaries in more complex situations. 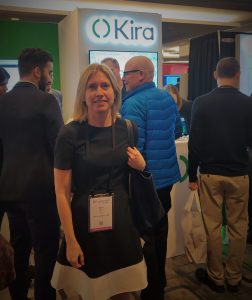 A general takeaway from this year’s LegalWeek is that even though it is still the largest legaltech event globally with great networking possibilities with all 8,000+ attendees, we missed the inspiring futurists key notes and overall buzz from past years. The number of exhibitors was markedly down and there was notably less buzz in the booths and exhibition areas.

Many of the best seminars were those organized by others all over Manhattan in connection with the conference (we attended for example the Tech Talk arranged by Artificial Lawyer and Cardozo Law School on Deconstructing Smart Legal Contracts and participated ourselves in a panel discussion on AI and Automation in Arbitration organized by Debevoise & Plimpton together with the SCC), but, in addition to the two key note presentations mentioned above, here are summaries from two LegalWeek seminars that we truly enjoyed and that both had a somewhat new angle: the seminar on Legal Design Thinking with Jessica Lowry, Experience Director, Mutual Mobile, and the seminar on Emojis and Sentiment as New Critical Risk Elements in Corporate Communication with Peter Gronvall, Ankura, Jack Malley, Spolzino, and Jordan Toumey Razza, Diaego. 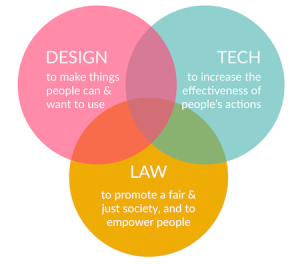 Design thinking is a method to address a problem and/or develop solutions, involving the following steps:

It is a trust and change management exercise, where focus is on understanding others perspective, empathy and collaboration. The people perspective is most important and in general design thinking has a very empathic approach. 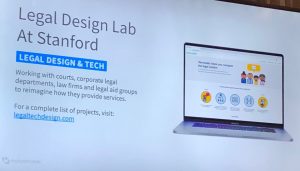 The world leader in legal design thinking is the Legal Design Lab in Stanford (legaltechdesign.com), that works at the intersection of human-centered design, technology and law to develop new models of user-friendly, accessible, and engaging legal services. One of the ongoing projects is the Navocado platform that creates and publish better guides to legal processes, with visual and interactive triage and process-guides.

As for emojis, they are now an established part of human interaction, also in professional and corporate communications. Emoticons such as : – ) and : – ( etc. were invented in 1982 to help people understand sarcasm or to tell the difference between jokes and serious posts on an internal university digital member board. From there, the first 176 original emojis emanated and soon became extremely popular. 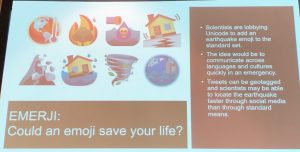 The best use of emojis are, similar to the use of emoticons in the beginning, for clarification, especially when sarcasm is used. There are also thoughts about using them to help save lives as well, for example by the use of earthquake or tsunami emojis that could help spread warnings faster.

But the danger with using emojis and the sentiment represented by these symbols is the risk for misunderstanding, even sexual harassment, defamation, or being interpreted as criminal intent or the constitution of an agreement. 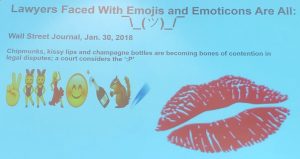 One of the most famous cases is the so called “Israeli Chipmunk case”, where an intent to rent a house was interpreted based on the emojis in the image to the left (except the kissing lips).

There are also several lawsuits involving the interpretation of emojis in sexual harassment cases and other criminal cases determining the intent. Emojis are now considered as any other electronic evidence and as part of the language, and there has been a huge increase in cases involving emojis the past years. (Famous cases involves a middle schooler posting a gun, knife and bomb emoji when naming person who had bullied her, which was considered as a threat, and the Medjet / Darlene Murdoch case, where the boss was freed from the sexual harassment accusations since there had been messages from the woman containing a smiling emoji which the judge interpreted as the behavior by the boss was welcomed.) 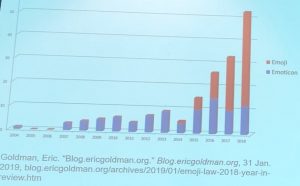 Apparently, most corporations do not have internal policies or guidelines on the use of emojis, which might be a huge risk that should be addressed, and a not-so-wild guess is that the number of cases involving emojis-based evidence will increase even more the coming years, as will the number of technological solutions to identify potential business risks involving emojis. Maybe we will see some new solutions presented at LegalWeek already next year…

Here are some other recommended reports from LegalWeek 2020 and articles on the topics discussed above: 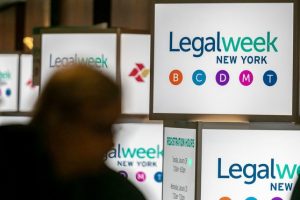