This week we are in New York for the annual LegalWeek conference (AKA Legal Tech New York) to get some inspiration and check out the latest legaltech developments. We will summarize our key take-aways from the week in different reports. Starting off today with the last session from the first day, since we liked this one the best – The Mythbusting of AI and the Law with Andrew Arruda, ROSS Intelligence. 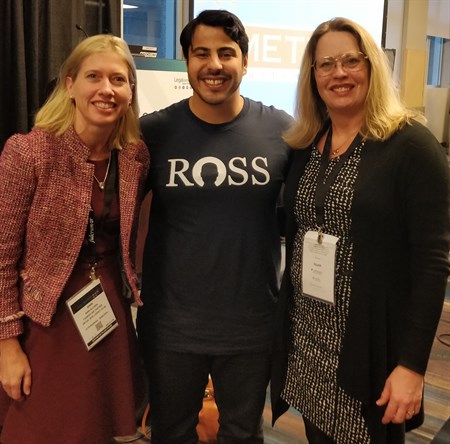 Andrew Arruda is the CEO and Co-Founder of ROSS, an artificial intelligence-based legal research platform, and a well-known speaker in the legal technology industry with an aim to change the way legal services are delivered. (He is also a member of the Forbes 30 under 30 class of 2017 and a 2016 TED speaker.) At LegalWeek, he also did his best to bust four of the most common myths about Artificial Intelligence:

No. Already during the Second World War, Alan Turing worked at the Government Code and Cipher School at Bletchley Park, where he devised the techniques which cracked the German Enigma code by using computer science and artificial intelligence.

The reason AI is so widely talked about right now, is because we now have the compute powers needed to do things that were not possible before, that we have all the digital data available to train with and the algorithms to create a new level of intelligence.

No. Artificial intelligence and robots are two completely separate things. AI is simply software, consisting of machine learning, speech recognition, vision and language understanding. There is nothing physical about it whatsoever. It can be put into a robot though. But that does not mean that it is a robot in itself.

3. AI is here to replace humans

No. In Chess and Go, AI solutions (IBM’s Deep Blue respectively Alpha Go) have won over humans, but what has happened thereafter is that new concepts with humans and AI solution working together have been developed. The concepts of Pair Go and Advanced Chess uses the machines as consultants to improve their play. And in all plays were humans and AI work together they beat both humans and machines working separately. Instead of replacing humans, AI solutions enhances us. Find out more here: “DeepMind’s AlphaGo to play on team with humans and to challenge five at once”

4. The singularity is imminent

No. Andrew Arruda made a quite funny metaphor to make his point, showing a picture of a large commercial airplane. Airplanes use artificial intelligence and advance technology systems to fly. But we never worry about airplanes replacing birds, or airplanes showing human emotions, giving birth to small Cessnas or hanging out at the local pub… Instead, we should think of AI as an enhancement for humans, or a symbiosis as the case with Chess and Go.

So, in 30 minutes Andrew Arruda managed to bust the most common myths and fears for using artificial intelligence. He also announced the launch of its new legal brief research tool called EVA, which is possible to try out for free: “ROSS Unveils EVA, A Free AI Tool To Analyze Briefs, Check Cites and Find Similar Cases”