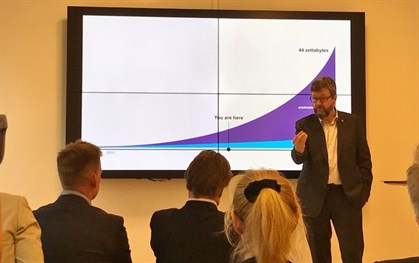 At the annual meeting of SIJU (Sw. Svenska föreningen för IT och juridik) yesterday, Mikael Haglund, CTO, IBM Sweden, held a very insightful and inspiring seminar on Robot Lawyers. Or “Excavators” as he preferred to call them, due to the current main focus to help lawyers dig up and analyse information faster and better. This cooperation perspective was emphasized throughout the seminar. The new technology with cognitive computing (or artificial intelligence in other words) should be combined with human intelligence to leverage human skills and efficiency, it should not be used to replace humans.

As we are entering into the ‘Cognitive Era’, as Mikael Haglund and IBM calls it, we need to deal with the overload of information. By 2020 all connected devices are estimated to generate 44 zettabytes of information on a daily basis (more bytes than there are grains on all sand beaches on earth). “Where code goes, data flows and cognition will follow.” IBM therefore focuses on the development of cognitive solutions like Watson, i.e. self-learning systems that uses data mining, pattern recognition and natural language processing to reason and integrate. Current legal projects involve Regulatory Compliance Analytics, Expertise Finder and Outside Counsel Insights and third party solutions like ROSS Intelligence and H&R Block Tax. ROSS Intelligence has developed a legal research tool, built on the Watson cognitive computing platform that will enable law firms to slash the time spent on research, while improving results, or as stated by ROSS Intelligence “supercharge lawyers with artificial intelligence.” Similarly, H&R Block with Watson combines the expertise of 70,000 tax pros with the technology of Watson to help ensure clients get the most credits and deductions available. Read more about IBM for legal in this interview with Mikael Haglund by Fredrik Svärd at legaltech.se (in Swedish): “Juristbranschen nästa för IBM:s Watson”

Even though the common focus on all Watson projects are to leverage human skills, not replace them, there are many others that fear the effects of automation and AI solutions. In a recent Swedish article “Robotisering väcker tankar om medborgarlön”it was argued that we might need to implement a basic income regulation for humans as robots will change the basis of the society and the economic systems to such an extent that humans will not be able to support themselves through work income. Most other studies, however, seems to be more positive and argue that in the past technology has always ended up creating more jobs than it destroys. In “Will smarter machines cause mass unemployment?” David Autor, an economist at the Massachusetts Institute of Technology, explains how automation in practice actually increases the demand for human workers to do the other tasks around it that have not been automated.

Similarly, in a recent analysis of the American workforce between 1982 and 2012, James Bessen, an economist at the Boston University School of Law, found that employment grew significantly faster in occupations (for example, graphic design) that made more use of computers, as automation sped up one aspect of a job, enabling workers to do the other parts better. “So far, the same seems to be true of fields where AI is being deployed. For example, the introduction of software capable of analysing large volumes of legal documents might have been expected to reduce the number of legal clerks and paralegals, who act as human search engines during the “discovery” phase of a case; in fact automation has reduced the cost of discovery and increased demand for it. Judges are more willing to allow discovery now, because it’s cheaper and easier. The number of legal clerks in America increased by 1.1% a year between 2000 and 2013.”

The McKinsey Global Institute has just published the report “Harnessing automation for a future that works” on automation and its potential effects on productivity and the global economy, part of ongoing research into the future of work, which James Manyika, Director, McKinsey Global Institute, further analyses in “Workplace automation – separating fiction from fact”. Among the findings in the report is that almost half of all activities we pay people about $15 trillion in wages to do in the global economy have the potential to be automated using currently demonstrated technology. But here’s the twist: More jobs will change than will be automated away in the short to medium term. Even though nearly half of the activities could be automated, only 5 percent of jobs could be entirely automated. Technology will unbundle aspects of legal work, forcing lawyers to move up the legal task ladder. “As companies deploy automation, we thus need to think more about mass redeployment rather than unemployment, and also to think about people working alongside machines and the skills that will be needed for the workforce of today and tomorrow-skills that will include a much closer interaction between humans and machines in the workplace.”

A recent article in New York Times, “A.I. Is Doing Legal Work. But It Won’t Replace Lawyers, Yet.” explains how the adoption of AI in law firms will be a slow, task-by-task process. “There is this popular view that if you can automate one piece of the work, the rest of the job is toast,” said Frank Levy, a labour economist at the Massachusetts Institute of Technology. “That’s just not true, or only rarely the case.” Even though law firms have started to implement AI systems, like Kira Systems, ROSS Intelligence, Luminance, RAVN, Lex Machina and others to speed up electronic discovery, due diligence and contract review, human scrutiny is still required. “The system is pretty good at identifying the gist of questions and cases, but Ross is not much of a writer,” said Jimoh Ovbiagele, the chief technology officer of ROSS Intelligence. “Humans take the rough draft that Ross produces and create the final memos.”

Dr Catrina Denvir explains in “The rise of the robot lawyer: Some assembly required”how this fact is one of the reasons why the legal profession as a whole is not yet really on board the idea that we are undergoing substantial change in the profession. “That the legal profession is not concerned by the implications of such change is hardly surprising. When AI is used as a marketing tool for any and all software that employs even a modicum of AI-related technology such as machine learning or natural language processing algorithms, disappointment is inevitable. Lawyers may well question the threat that such technology presents in its current form.” She also concludes that in order to reach the second order change of irreversible modification of the practice of law we must build on the strengths that computes have that humans do not. “We must move beyond the combative idea that we are trying to create a robot lawyer to replace lawyers. The future of law requires us to reflect on how we might embody the concept of a robot lawyer ourselves, using technology symbiotically to both complement our human skills and compensate for our human shortcomings.

Just like US President Lyndon B. Johnson emphasized back in 1964: “Automation should be viewed as an ally, not an enemy. If we understand it, if we plan for it, if we apply it well, automation will not be a job destroyer or a family displaced. Instead, it can remove dullness from the work of man and provide him with more than man has ever had before.”

In the Robot Lawyer seminar, Mikael Haglund even emphasized the fact that all these new tools will need more legal consideration and that a new sets of rules will need to be developed for the legal aspects of the use of the tools as regards ethics and integrity, risk and responsibilities, data security and protection and much more. I.e. lawyers will not be replaced by Robot Lawyers, but might even get more job due to the technological developments.

The digital transformation and the impacts of Artificial Intelligence in legal will be the main theme at VQ Forum on 19 October.