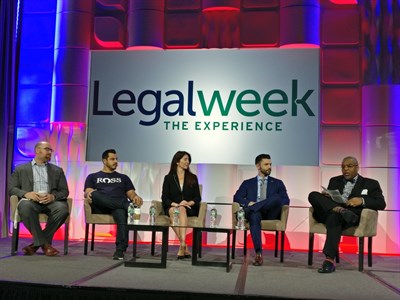 To say that AI is the number one buzz word in legal at the moment is to say the least. But there is still a big uncertainty about what it actually is and what it can do. A general misconception seems to be that Artificial Intelligence is a single “thing”. It is not. It can be clause identification, anomaly detection, general due diligence review tools, cognitive systems, machine learning etc.

One of the AI-seminars at LegalTech focused on the use of machine-learning technology in due diligence reviews, where the tools help lawyers review large sets of material, looking for risks and pitfalls. The reason to use tools like Luminance, Kira, eBrevia and others is mainly to cut costs and increase efficiency, but inter aliaSvein Gerhard Simonnaes, BA-HR, and Steven ter Horst, Hothoff Buruma, pointed out other positive effects too. For example, it can be seen as more neutral to the transaction parties when the review is based on machine analysis rather than by one of the parties’ attorney. They both also stressed that, even though a tool is used to access the material in a different way, the end products to the clients has not really changed.

However, they have experienced questions regarding validation of the algorithms and how to ensure that the outcome is correct, when it is produced “within a black box”. As a wise person in the audience pointed out, what is more of a black box than the human brain? How can you control the exact decisioning and reasoning behind a human decision? If two lawyers look at the exact same problem, they will most likely reach different results without being able to explain the exact facts that accumulated to the decision. I.e. the alternative to the use of an AI tool is not perfection. If anything, AI makes reasoning more transparent. As quoted by Mark Twain, “Facts are stubborn, but statistics are more pliable.”

The user of AI tool in the legal business will probably lead to increased expectations of the lawyers. It will no longer be possible to base legal advice on a gut feeling. When improved tools are available, lawyers will get a better base for the judgement; they will be able to focus more on the wisdom part, moving them up the value chain. The client will benefit hugely from this by getting cheaper, quicker, more transparent and better DDs with AI tools. The rebound effect could however be that more DD reviews will be conducted when it is considered cheap enough even for small transactions.

In another very interesting and inspiring panel discussion with inter alia Andrew Arruda, ROSS Intelligence, Zev Eigen, Littler Mendelson and Brian Kuhn, Watson IBM Global Business Services, it was stressed that AI is in a very early state and that it is important to learn how it works and how it can be best used in its context. They made a comparison to the technical shift from horses to cars – cars have several benefits compared to horses but cannot be used in front of a plough to plow a field.

In our previous blog post from LegalTech we described the importance of using evidence-driven decisions instead of relying on “HiPPOs” (please see Polanyis Paradox and Hippos at LegalTech 2017). When combining this with cognitive learning, several common truths and beliefs will be challenged. It was proposed that we for example should use AI to find and retain talent. Zev Eigen meant that resumes are not at all predictive (“Going to Harvard is predictive of nothing.”). He does not care at all about degrees, instead he uses data and data analysis to find the right talent.

IBM Watson is a famous example of a cognitive system, which combines understanding, reasoning and learning. It is a cognitive system that understands like humans do. It reasons and form hypothesis from which it extracts concepts. It advances with each new piece of information. Most important though is the feedback process of learning. If it can work closely with an expert within the specific area of expertise and receive feedback of what is right and wrong, it will be trained to develop even further expertise on its own. An AI systems never stops learning.

Artificial Intelligence is now an area of interest for all global giant corporations such as Microsoft, Apple, Google, IBM, Yahoo, Intel, Salesforce, Uber, Twitter, Facbook etc etc. They are all investing heavily in AI. This is the first time in history that all major players have jumped the gun to a new trend without hesitation.

The challenge is to form the right partnership between man and machine, to combine the skills that humans excel at with the abilities of a cognitive system.

An AI system will handle several tasks much better than a human, such as going through loads of documents in just a second. If you as a lawyer can partner with such systems and focus on what you as a human can excel at, you seems to have found the right strategy for becoming the lawyer of the future.

Read all our posts from LegalTech 2017: