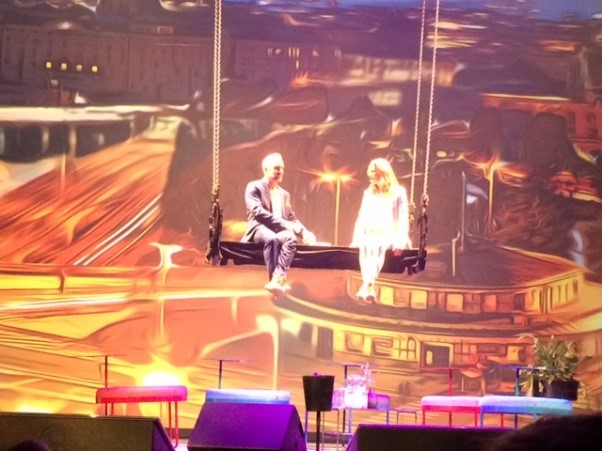 This week we attended Sime, a two-day conference about the Internet and digital opportunities. One of the key takeaways from these two days was the importance of digitalization being at the heart of the organization and the business. For example, Mia Brunell Livfors, CEO Axel Johnson, emphasized that you should not have a separate digital strategy, instead it should be an integrated part of the overall business plan.

For example, Mia Brunell Livfors, CEO Axel Johnson, emphasized that you should not have a separate digital strategy, instead it should be an integrated part of the overall business plan.

Also Lottie Knutson, Professional board member and former senior executive at Fritidsresor/TUI, pointed out that you should stop talking about digital transformation and instead talk about the tangibles of your business. 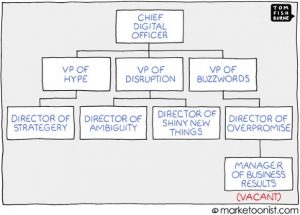 To succeed with digitalization you more or less have to go to bed with the IT director and not to make the common mistake to set up a separate department or hire a “digitalization officer” or similar to deal with these issues. As this picture illustrates, you then risk losing out on the business results…

To succeed, digitalization has to permeate all aspects of the business. You also have to be bold and curious.

Both Mia Brunell Livfors and Lottie Knutson talked about the importance of mistakes and how the fear of failure is the biggest obstacle for successful innovation and development. “Mistakes are never planned, but they have to happen, otherwise you’re not trying hard enough,” as Mia Brunell Livfors said. The hardest problems is to create awareness for the need for digital transformation when the business is so good at what it is doing right now. Another problem is to find the right competence; people with both skills and guts. At Axel Johnson the vision is to replace 50% of the current business with new digital offers and ways of doing business within ten years. The keys for getting the whole organization on board for this transformation are facts, education and patience.

Another key takeaway from Sime was the importance of critical thinking and diversity in the organization. “You need friction to start a fire,” as Mia Brunell Livfors pointed out. Laurie Segall, editor-at-large for CNN Tech, also talked about how technology is inflecting society (like the social media impact on the recent US election) and how it is now time to start asking the hard questions. Time to focus on ethics and discuss the implications in society. Until now technology has more or less forced us to use it its way, but now technology is more and more being adapted to the way we humans do things. Technology will expand our reality, but will also lead to a lot of polarization; between traditional and disruptive thinking, between rural and urban areas, between educated and less educated etc. Today we are living in a “post-truth” era, where false news are being spread and where false or biased information is shared in silos without criticism of the sources, which is a very dangerous development. We humans need to be in charge of the technology we create to build the society we want in the future. 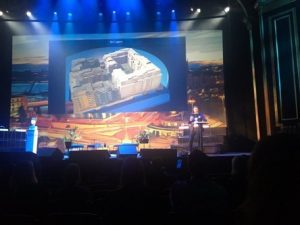 During these days we also experienced new cool and inspiring technology and solutions, like wec360°, a new virtual real estate solutions that uses 3D-technology, Virtual Reality and Augmented Reality to allow you to see the apartment, the building and the whole block from any angle, and the new car project Lynk & Co where a new driving platform will be created, which will make us rethink what a car is the same way iPhone made us rethink the phone.

Other interesting news was how Google has moved from “mobile first to Artificial intelligence first”, according to Google Sweden’s CEO Anna Wikland, and how much they now focused on voice searches and images. 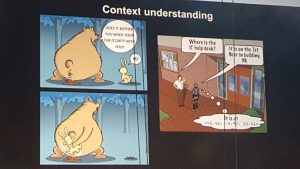 On the robotic front Danica Kragic, Professor of Computer Science at KTH Royal Institute of Technology in Stockholm, shared the complexity of contextual understanding with this illustrative slide.

She also pointed out that we humans often makes mistakes about the context, but that if a robot makes a mistake it will probably be more difficult to forgive. 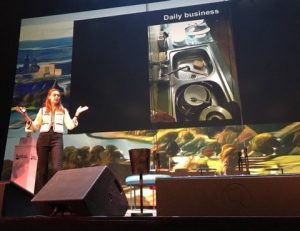 Another really difficult challenge for robot developer is to make robots that can act like human hands, for example for seemingly simple things like doing the dishes.

Finally, to connect to one of the major topics at VQ Forum last month, Imogen Heap, four-time Grammy nominated singer-songwriter, talked about her vision to use blockchain as a way to rethink the basic, core structure of how monetary distribution works in the industry.

According to Imogen Heap, blockchain can be used to build a united platform and create an ecosystem, but most importantly build innovation under the standards that make sense for artists. Alongside aiding fast, frictionless royalty payments, blockchain can also help to create a networked database for music copyright information, enhance transparency through the value chain and aid access to alternative sources of capital. 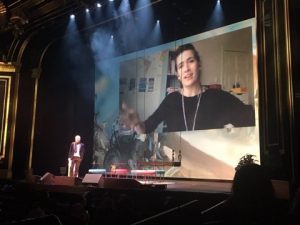 For Imogen Heap, using blockchain is undoubtedly linked to creating fair value for the exchange between artists and listeners.

By cutting out the middle men, there is a sense of getting back to the more intimate direct exchange between artist and listener. Blockchain could also provide additional information about the music, such as where and why it was written, who has covered it, who else worked on it etc.

“It’s not just about listening, it’s about seeing the entire life behind the music, the whole life of a song.”