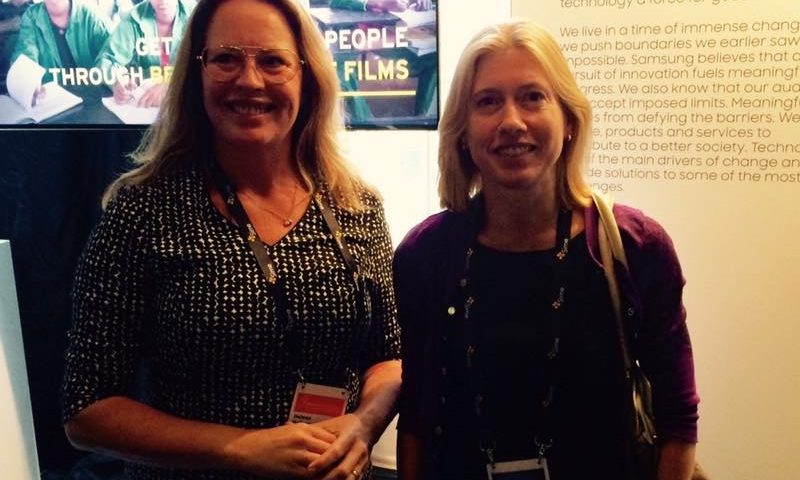 Sime is a two-day conference about digital opportunities and how to convert these into new business. Here we will try to swiftly summarize our impressions from the first day of exploring the world of digital business and taking part of the inspiring vibe and entrepreneurial buzz. (A more elaborated report will be provided within a couple of days.)

The conference is however not only about using digitalisation for new business opportunities, it also has a very clear altruistic approach on how digitalization can be used to create a better world, to support human rights and to do good, and how to involve everyone in these exponentially changing times.

“We live in wonderfully abnormal times right now.” as Ola Ahlvarsson, Chairman of Sime, said in his opening remarks. “The lean, mean, fail fast and try again world.” The Unicorn club is getting crowded, there are online services for just about anything now (for example fiverr – whatever you need, someone in the world will help you do it for 5 dollars, or Fishbrain – an app to help you catch more and bigger fish) and the sharing economy is empowering consumers and replacing the traditional supply chain by operating systems. But at the same time, about 70 per cent of all jobs today will disappear and well-reputable experts, such as Stephen Hawking and Elon Musk are warning that artificial intelligence could end mankind, or that robots are as dangerous as nuclear weapons. What opportunities, but also big risks, does the digital world contain for the future? The speakers of the day all addressed these questions from different aspects.

The first speaker Salim Ismail, former Vice President of Yahoo and Founding Executive Director of Singularity University, talked about the power of exponential and how to create organisations that can scale to meet the exponential disruption. A key factor is to build organisations for where the development is going, not where it is today.

As Salim Ismail pointed out, 20 years ago cell phones were the size of a brief case, now it fits in the palm of your hand. 20 years from now it will be the size of a blood cell. Solar energy was almost condemned not long ago for being too expensive to ever be profitable, but if the current development continues, solar energy will meet 100% of our energy need in 23 years. And collaborative consumption, like AirBnB, will be the largest hotel operator worldwide already next year. What impact will this development have for any organisation? How should organisations respond to a change from scarcity to abundance, or to the key development factors of digitalisation, the internet of things, disruption, demonetizing and democratizing? Soon there will be one trillion connected devices in the world.

Flexibility in the organisation is the key to success in the future. Another is not to kill good ideas before they have been tested. Most experts tend to say no to new revolutionary ideas as they contradict their expertise. Amazon has therefore implemented the ‘Institutional yes’ to avoid killing the next game-changing idea anyone brings up within the organisation.

One problem however is that society is not ready for the new digital world. The society and legal system is built for a local and linear world, not an exponential and global one. Being a large country used to be an advantage, but now it is better to be small and quick to change. Therefore most adaptation is made in smaller and more flexible countries like in Scandinavia.

Raoul Grünthal, CEO, Schibsted Sverige, then talked about how to move further beyond the digital transformation. Just because you have made a successful switch you cannot lean back. Being successful for the last two years does not mean that you will still be successful two years from now. “A digital victory seldom lasts.” You cannot defend old business, you have to adapt and develop all the time. The problem is not that legacy companies do not make mistake, it is that they do not even try. All companies need to be “bold, brave, daring, crazy and humble”, to succeed.

The most impressive stage appearance was then made by 15 years old Emil Erne from SIME Next, who presented his business idea and told all the old people in the audience what they should learn from the next generation. Emil Erne is a name to remember for the future, that is for sure!

Pixie Sartang, social media expert, Sitrus, talked about making technology human and how we are developing personalized technology but losing the human connection. She also presented some good examples on the difference between natural behaviour and brand expression and how easily marketing campaign can go wrong, but also the power of engaging with your customers. Companies should not target gender, location or age, but behaviour and psychology of customers. Marketing should be based on storytelling and human needs and feelings to succeed.

Next session focused on making people´s lives simpler and better. Lars Stugemo, CEO and President, HiQ, explained how HiQ is taking a holistic view on building great tech and driving change in every project. With innovations like Swish, HiQ has helped simplify customer’s life by making financial transaction so much easier, and at the same time saving money for the society, as cash handling is very expensive. In Project ngulia they contribute to stopping the poaching of rhinos in Africa by providing the rangers a simplified communication platform. They have also created a Facebook for deaf blind people by using sensors and smartphone technology. But most of all, Lars Stugemo talked about the emotional dimension when using both your brain and your heart and asked the audience about the last time they were so excited about work that they forgot it was a holiday?

A panel with Chris Boos, CEO & Founder Arago, Torbjörn Hägglöf, IBM Watson ambassador, and Claes-Henrik Julander, Founder of Pan Capital, discussed what will happen when a computer is smarter than all of us, based on their own AI-developed systems. The key take-away was the need for responsible decision making and how it is about man and machine together. We have to be the machine’s teachers rather than programming them with ethic rules for the machines to apply on their own. Humans are very good at breaking rules when ethically necessary, something a robot would have problems with. Another key take-away was the prediction that specific human skills or aspects will increase in value, like nurses with empathy skills will soon be valued more than doctors, whose skills could easier be replaced by a robot.

Anna Felländer, Digital and Futuring Economist, Swedbank, participated in three sessions giving her view on the digitalisation from different aspects.

Traditionally the GDP in Sweden has come from manufacturing, but the sharing economy has completely changed this. The manufacturing industry has decreased significantly, but on the other hand the service industry has grown exponentially. This is also part of the definition of digitalisation, that physical goods are transformed into digital services and middle-men being replaced by digital platforms. Somewhat ironically however, digitalisation is spurring physical meetings and urbanisation. All things that can be digitalised will be, but things that cannot be digitalised will instead increase in value. With digitalisation we could work from anywhere, but we value social meetings and creating communities more, thereby building dynamic and creative hubs like the Stockholm start-up community. For the co-creation, open innovations and new types of partnerships of the sharing company you need a high density of entrepreneurial people.

Another reason for Stockholm being a digital innovation centre is the modernised welfare of Sweden, making it less scary to take the risks of being a start-up innovator.

The loss of manufacturing productivity will not be replaced by the intake of digital services. There are also risks and society issues these services will lead to, as they do not pay taxes nor create employment to the same extent. But, as Anna Felländer pointed out, things are better than the statistics say. A lot of productivity is actually created, but is not visible in the statistics. For example, time optimization and free digital services are creating real value in the economy.

During the day we also got reports from Matt Brittin, Head of Europe, Middle East and Africa, Google Inc. on the future according to Google, a presentation of some of the coolest new Nordic start-ups, a tour on what is hot and what is not in the world of exponential tech by Laurie Segall, CNN’s top tech reporter and an inspiring presentation on how virtual reality can be used to create deep understanding, empathy and learning, in the cooperation between UNHCR And Samsung. Access to information should be a human right. That is why Google is focusing so much on voice recognition (as it takes down the barriers of not knowing how to read and write) and the new project Loon (using weather balloons to connect people in remote areas without Internet access). Matt Brittin explained how Google develops their business by asking big ‘What if’-questions about things that can make people’s life better. He also explained how technology development is not evolutionary, but happens via revolutionary breakthroughs. The name Alphabet is a way of explaining all other things made within the company apart from Google, like human rights and health care related projects.

The final session was a brief introduction to Yeonmi Park, North Korean freedom activist, who talked about her reactions from first entering the west and the digital world. We sure look forward to learning more about her brave escape from North Korea tomorrow.